Andy Thibodeau was called “Mr. School Spirit” by King’s at Western University when they named him alumni of the year in 2014. This passion for leadership and school spirit started in elementary school when Andy successfully ran for student council Vice President. From organizing dances in grade 8, pep rallies in high school and orientation week in University, Andy’s enthusiasm for youth leadership led to his unique career of inspiring students and staff across the continent. 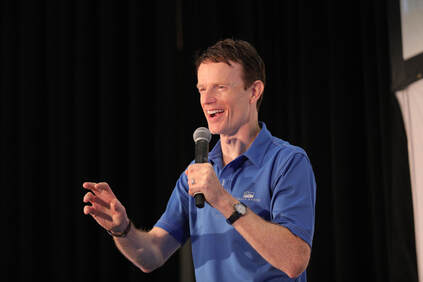 Since 1992, Andy has delivered thousands of fun inspirational presentations to schools and conferences across North America. Over two million people have seen him speak in all 10 Canadian provinces, the Yukon and 40 US states. Each year over 120 schools, conferences and charities are IMPACTED by his messages.

Andy lives in his hometown of London with his wife and two daughters. He has his History degree on the dean’s honour list from King’s College at Western University. Andy empowers student leaders because he was always an active student leader: Student Council VP in elementary school, Student Council President at Sir Wilfrid Laurier Secondary, and Orientation Week coordinator in University. A highlight of his student leadership career was when Much Music named his high school the “Most Spirited School in Canada” while he was president.

Andy continues to give back to his alma mater. Since 1997 the first year class at King’s University College are inspired by Andy’s welcome message on the first day of school.